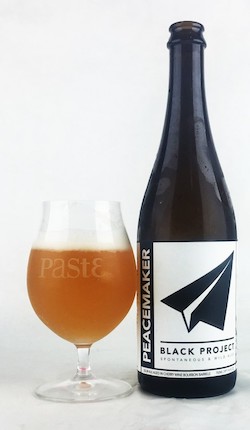 143. That’s how many bottles made it into our wild/sour beer tasting this summer. Is 143 wild/sour beers too many wild/sour beers? If you drink them all at once, sure, but if you space it out over days, and if at the end of those days you come to the agreement that this beer, a sour from an up and coming young brewery, is the very best of the lot, then no, it’s not too many wild/sour beers. It’s just the right amount. Black Project, out of Denver, specializes in “heady and spontaneously fermented wild ales,” and Peacemaker managed to stand out in the tasting, even with such stacked competition. It’s a blend of two beers, “both fermented from coolship-caught microbes,” before being aged in bourbon barrels that then were used to mature Colorado cherry wine.

The result is the best of both worlds—a softened bourbon whiskey character with traces of the original caramel, vanilla and deeply toasted oaky notes, but with the addition of bright cherry and strawberry fruitiness. There’s elements of funk, which contribute some light barnyard characteristics and perhaps a touch of light peach fruitiness, but that’s the running theme of this beer—many, seemingly disparate elements that are all working together, with none coming to dominate the others. This is not some treacly, sweet, artificially fruity attempt at an American wild ale. It’s a sophisticated, complex beer that uses both complementary and contrasting notes to build layers of flavor. 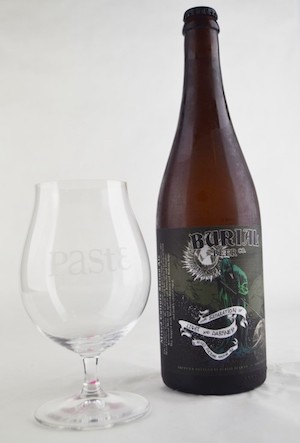 We’ve known for a while now that eventually, Burial was going to win one of these tastings. Their batting average is almost always in the top tier; they’ve just been waiting for exactly the right category to spring something like this on us. There were 116 beers in our blind tasting of the best saisons this past summer, and even though Burial is known as a bit of an IPA factory, they’re just as prolific in the saison category. Separation of Light and Darkness is a showpiece for both their brettanomyces and lactobacillus mixed culture as well as their skill with using hops as a finishing touch. Moderately tart, it’s quickly clear that this is a brett beer as well, as it puts forth a telltale funk that is earthy and almost slightly leathery. But up front, it’s all about the citrus. Says one score sheet: “Amazing citrus aroma, and perfect acidity.” From another: “Funky, tart, citrus, peppery, wow.” From one more: “Just a clean, bright, hoppy, perfect saison.” 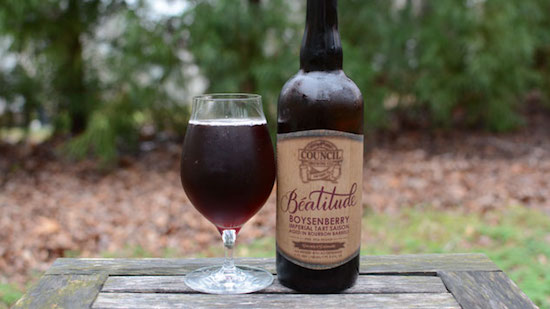 The Beatitude Boysenberry came across our path at the beginning of the year, as the latest in the brewery’s Beatitude Tart Saison series, which is over a dozen strong with a cornucopia of fruit and dry-hopped variants. The Boysenberry follows through with its robust name, delivering huge notes of the promised berry on the nose and sip. Those jammy flavors help cut through the sourness of this beer, which is plenty damn sour. Particularly on your first couple of sips. It’s bracing. But you also get vanilla and oak from the barrel, and that jam kicks in hard providing a sweetness and balance. In the end, our reviewer called it a “glass of tart berry jam” that was absolutely stunning. 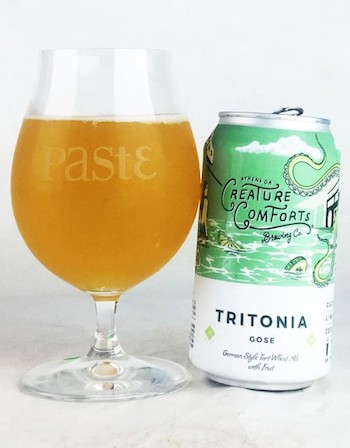 Remember when gose was the strange new kid on the block? Now it seems like everyone who’s anyone is brewing a gose. We tasted 64 of the best of them and ended up crowning this beauty from Creature Comforts, which our tasters decided was “the ultimate summer refresher.” It takes cucumber and makes it the star of the show, with a clean, incredibly refreshing cucumber note that shines through the beer from start to finish. At the same time, though, it never loses track of the other “gose” elements: There’s some pronounced coriander and a big twist of lemon-lime citrus, which provides just enough residual sweetness. Tartness is right in the middle—firm enough to be refreshing without getting excessive. For all intents and purposes it’s pretty much a classic gose until the cucumber element comes in and takes the beer to the next level. 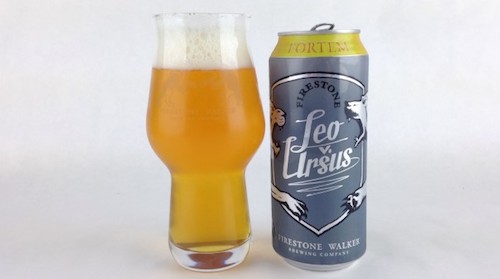 At this point in the state of craft beer, another new double IPA isn’t that big of a deal. New DIPAs hit the shelves seemingly every day. One just dropped in the time it took you to read that sentence. Wait. There’s another one. But when Firestone Walker introduces a new DIPA, shortly after discontinuing their beloved Double Jack IPA, we pay attention. Fortem is the first beer in a new series dubbed “Leo v. Ursus,” and it will only be on the market for a few months at best. So, when they sent us Fortem, the first in a new Leo v. Ursus series of beers. It blends old and new hops from the Pacific Northwest and Germany with pale malt, wheat malt and flaked oats. The result is a creamy body that helps emphasize the aromatics, which are “big on citrus, with lots of lemon, grapefruit and orange,” according to our reviewer. The taste is maltier than you’d expect from the nose, approachably bitter with plenty of citrus fruit goodness without falling into the “sweet” IPA category. It’s also much easier to drink than its predecessor, Double Jack. Our writer went so far as to call it a “beach party DIPA.” That’s my kind of beach party. 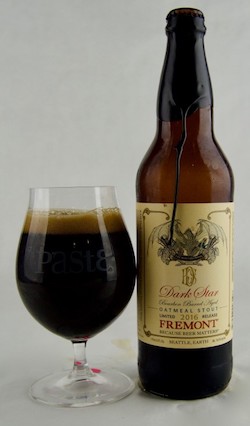 The barrel-aged imperial stout, as a style, includes some of the best beers in the country. Think Goose Island Bourbon County Stout. Think Founders Kentucky Breakfast Stout. The competition was fierce, but in the end, Fremont Brewing’s Bourbon-Barrel Aged Dark Star (with an ABV of 14.5%!) rose to the top thanks, largely, to its perfect execution of the style. Fremont didn’t mess around with adjuncts (no cacao nibs or vanilla beans? Really?); instead they blended three different batches to create a rich, barrel-heavy beer that’s full of molasses and maple syrup. The beer earned Fremont Brewing the title of “barrel-aged stout masters.” 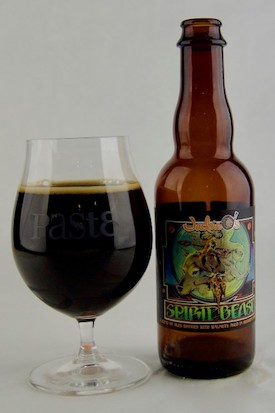 Jackie O’s is one of the most amazing breweries you've never heard of. Spirit Beast is a mixture of five different stouts, plus a quadruple, all blended before being aged in various barrels before being blended yet again. That’s a lot of work, and the result is a big pay off that our tasters called, “a revelation.” As you might expect from a beer with that much back story, it’s really complex, with all kinds of flavors (from cocoa to dark fruit to booze to wine) coming at you from all angles. If you get your hands on one, take your time with it. You won’t be sorry. 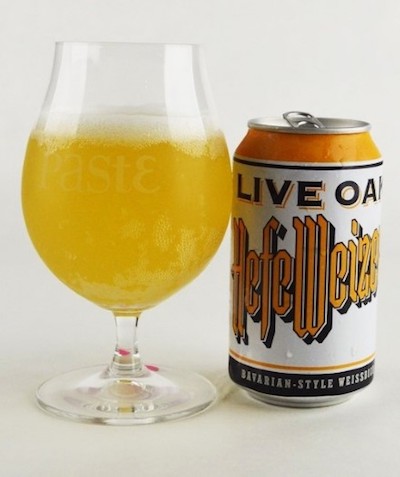 We put together a blinding tasting of Wheat Beers and Hefeweizens—a style that can probably be credited with getting a large share of drinkers into craft beer in the first place. Raise your hand if the first beer you fell in love with was Blue Moon? Go ahead, don’t be ashamed. The style is robust these days, to say the least, with hoppy wheats and tart Berliner Weisse offerings and fruited wheats…It’s a broad field, so we narrowed the tasting down to just American pale wheats and German hefeweizens. Live Oak’s Hefeweizen took the honors. It makes sense, because Live Oak is located in Texas and, well, Texas is hot as hell. It’s a state that needs a light, effervescent beer. And Live Oak’s Hefeweizen is just that, with a very “authentically German” nose that seemed downright imported by out tasters. The taste was a wave of banana bread and light spice delivered on a wave of creamy malt backbone. Hell yeah. Summer. Even more impressive, this is the first blind tasting Live Oak has entered. Not bad for a rookie.

PIZZA ON THE GRILL IN 6 EASY STEPS